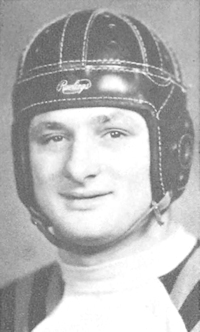 Funeral will be at 10 a.m. Saturday, June 5, 1999 for Ralph E. Foster Jr, 81. Services will be held at the Stillwater First Presbyterian Church. Dr. B. Gordon Edwards will officiate. Interment will be at Sunset Memorial Gardens under the direction of Strode Funeral Home. The family requests in lieu of flowers, donations be made to the Judith Karman Hospice, P. 0. Box 818, Stillwater, OK 74076-0818.

Foster died June 3, 1999, at his home in Stillwater following an extended illness.

Foster, a graduate of Oklahoma State University, was an outstanding athlete in high school and university. He played football for Perry High School earning All State honors, at OSU earning a position on the College All Stars team in 1945 and played for the Chicago Cardinals for two years. Foster served as Captain of the 1939 OSU football squad and again in 1944 when OSU won the Cotton Bowl in their first ever post-season bowl appearance. He was a life member of the OSU “O” Club and named to the first team of the first 50 years of OSU football.

During World War II, Foster entered the United States Navy under the Gene Tunney program as a Chief Specialists, transferred to gunnery school and was commissioned an Ensign. He was assigned to an escort vessel and served in the Caribbean and South Pacific until October 1943 when he received a medical discharge. This allowed him to return to OSU where he initially worked in the OSU Athletic Department as a trainer and continued his love of football. After completing his professional football career, Foster was appointed Military Property Custodian and Freshman Football Coach by Dr. Henry Bennett. Foster was also a high school and university football official for 20 years and worked numerous post-season bowl games including the Blue Bonnet and Sun Bowls. One memorable game he officiated was the first football game ever played on Astroturf in the Houston Astrodome between Tulsa and Houston Universities.

Foster elected early retirement from OSU Military Department in 1979 in order for he and his wife to travel. He was an avid fisherman and outdoors-man.

Foster was a life member of the American Legion, served as Exalted Ruler of the Stillwater BPOE, was a member of the Oklahoma Education Association and a member and Deacon of the First Presbyterian Church.

He was preceded in death by his parents and brother, Williams “Woody” Foster of Perry.