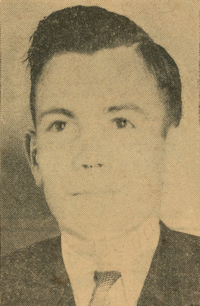 – the son of Mrs. Lizzie Eisenhauer of 826 Cedar street. He was born in Perry and has lived here all his life.

Mixing basketball and singing into his high school career, he was on the cage team and sang in the operetta.

He likes to be called “Katz.”

He worked in the Safeway store during his school days, likes to collect stamps and dance to swing music.

He plans to continue working for his same employer following graduation and may attend Oklahoma A. and M. College.

He was born July 18, 1921, in Perry, to Herman and Elizabeth (Boright) Eisenhauer. After his graduation from Perry high school in 1939, he and Virginia Dixon were married on July 12, 1941. During World War II he served in the Navy.

A memorial service and inurnment will be held Tuesday, June 22, at 1pm at Westlawn Hillcrest Funeral Home and Memorial Park at 5701 Center St, Omaha, NE.