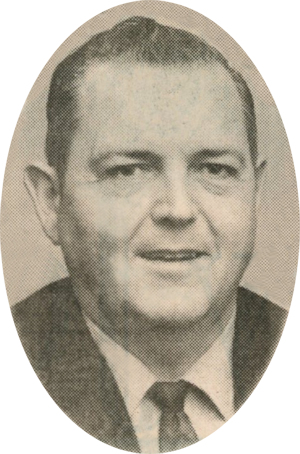 In the event Gene Charles Wood passes through the normal processes of selective service, the United States armed forces are going to find themselves with a husky heavyweight on their hands.

Gene was a member of the Perry wrestling squad this year, trying for a berth at the top weight. One of the 1943 graduates, Wood is also a member of the Future Farmers of America chapter here.

His parents are Mr. and Mrs. W. S. Wood of route four, Perry. He attended Barrett and Oak Hill grade schools before entering Perry high school. Although born in Stillwater, Noble county has been his home for the past 16 years.

﻿Gene C. Wood, 81, of Perry, Oklahoma, was the son of William Stanley and Ruby Lavern (Hodge) Wood. He was born August 9, 1924 in Noble County, Oklahoma and died Wednesday, February 15, 2006 at Perry Memorial Hospital.

A life-long resident of Noble County, Gene was a 1943 graduate of Perry High School and served in the United States Army Air Force from May, 1943 until March, 1946. He earned the rank of Corporal before he was honorably discharged from military service.

He was employed in city and county law enforcement for 22 years, serving as Noble County Undersheriff for four years and Perry Chief of Police for 12 years.

Gene later was director of personnel services at Charles Machine Works for 12 years and served as manager of the Perry Chamber of Commerce for eight years before retiring in 1988. He also worked part-time at Brown-Dugger Funeral Home and Casteel Real Estate and Auction.

During the 1950s, Gene was involved in numerous youth activities, including baseball and Boy Scouts of America and served as president of the Perry Pewee Baseball Association.

Gene was honored as Perry’s Citizen of the Year and was a 2004 inductee into the Perry Chamber of Commerce Hall of Fame.

Funeral services will be at 2:00 p.m. Saturday, February 18, 2006 at the First Presbyterian Church. The Rev. Paul Stewart will officiate. Interment will be in Grace Hill Cemetery. Services are under direction of Brown-Dugger Funeral Home of Perry, Oklahoma.

He was preceded in death by his parents, Stanley and Ruby Wood, one brother, Paul R. Wood, three sisters and brothers-in-law, Nell and “Doc” Sosbee, Margaret and Everett Wilcox and Libby (Russell) Johnson and Jiggs Russell; and one son-in-law, Gene Briegge.