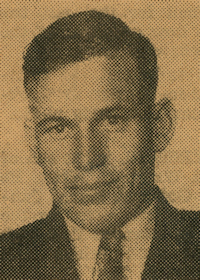 He is reporter for the Future Farmers of America chapter in the Perry school and has been for two years. His hobbies include swimming, hunting, horseback riding and fishing.

Next year he plans too attend the Cameron Junior Agriculture college and study farming.

Final services will be at 2:30 p.m. Friday in the First Presbyterian church for Elvin L. Krisher, 28-year-old son of Mr. and Mrs. John Krisher, 1306 Delaware street, who died Monday evening in a Dermott, Arkansas hospital after an illness of only 12 hours.

Rev. R. E. Dreger, pastor of the church, will conduct last rites, assisted by Rev. David Thomas of Stillwater. Burial will be in Grace Hill cemetery under direction of the Newton funeral home.

Krisher was born March 13, 1921, in Walters, Oklahoma, and came to Perry in 1922 with his parents. A 1940 graduate of Perry high school, he played football and basketball with the Maroons during his high school career.

He enlisted in the naval air corps July 24, 1942, and served 38 months in the southwest Pacific before being discharged.

In addition to his parents, survivors are his wife, Doris, of McGehee, Ark.; a son, Edwin, by a previous marriage, of Lawton; a brother, Bob, of Valier, Mont.; and two sisters, Betty June and Patsy Lou Krisher of Perry. One sister preceded him in death.