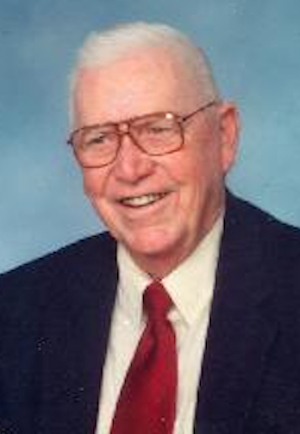 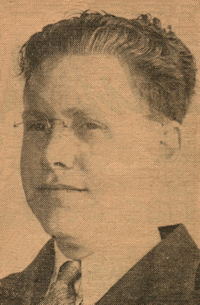 Mike is a Noble county product. He was born at Billings. He attended Perry schools.

He mixed his basketball playing with the Senior play while he was in school. He was president of the junior class and president of his homeroom in 1939.

He worked at the Famous store during his high school days. His hobbies include tennis and collecting salt and pepper shakers. He plans to “work” in the future.

Born September 27, 1919, in Oklahoma to Frank Butler and Dora O. (Postelwait) Faulkner, he graduated from Perry high school in 1939. He was a Veteran from WWII service, US Army. Mike graduated from Fresno State in 1957 receiving his BS Degree, later to return for his Masters Degree in Administration.

Mike taught school for the Madera Unified School District as an eighth grade science teacher and later became the principal of John Adams School. After retirement Mr. Mike became a substitute for Madera High School until 1994. He was a member of Madera United Methodist Church.

He is preceded in death by his parents, his wife, Eleanor (Bobbitt) Faulkner in 2001, and his two brothers, Orval and Harold.

A Memorial Service will be held at the Madera United Methodist Church, on Wednesday, December 28, 2005, at 10:00 a.m. Interment with military honors will be held at Arbor Vitae Cemetery following the Church Service.