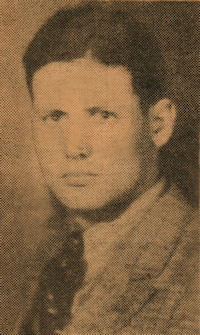 – son of Mr. and Mrs. Roy Edwards of Perry, was born in Perry on Nov. 7, 1918. Edwards attended the elementary grades in Perry and high school in Perry. During his high school career her was a member of football, track and basketball teams.

Born November 7, 1918, in Perry, Oklahoma, to Roy and ALma Woodrum Edwards, Robert was the second of six children. Robert loved sports and played football for the “Perry Maroons” in high school where they won All State Championship in 1936. He went on to attend Tulsa University on a football scholarship. Robert joined the Air Force in World War II and spent four years attached to the 379th Bomb group out of Kimbolton, England. Robert completed 38 missions over Germany and France. His last three runs were over Normandy on D-Day.

Robert returned to the oilfields after the war and married Ada Jensen of Vernal, Utah in 1947. Robert and Ada lived in Ventura, California, Oklahoma City and Ft. Worth before settling in Houston in 1957. He worked for Baroid, Oil Base, Magcobar and Dresser Industries. He retired from the oil business in 1990 after 35 years under Dresser as Vice President of Executive Sales-Oil Field Products Division.

Robert was a Director and a Charter Member of Splindletop Golf Association. He held memberships in the Petroleum Club, Houston Club, Warwick Club, the International Club, Cork Club, Braeburn Country Club and Lakeside Country Club. He was active in the Petroleum Oil Producers Society, API, AIME, Royalty Owners Association and ARE.

Robert was a loving husband and father who possessed a special charm and wit. He had many friends and was loved by all. He will be missed by many.

Robert is survived by his wife Ada; his daughter Debra Edwards and her sons Derek and Ryan Rodgers of Houston; his son Tommy Edwards and his wife Kristene, their children Sydney and Jake of Spicewood, TX; brothers David and Donald; and sister Dorthy of Perry, Oklahoma.

In accordance with his wishes, there was no funeral or flowers. A private ceremony was conducted by the family. Robert was cremated and his ashes to be spread above the family’s cowcamp on Ripple creek near Buford, Colorado. The family said, “We want to thank everyone for their friendship and all the fond memories.”