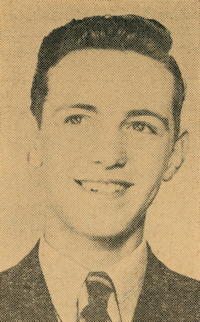 He served as sports reporter and special events reporter for the Perryscope.

He placed first in the 112-pound class in the state DeMolay conclave in 1941 and has been awarded various tennis honors.

After graduation from high school he plans to enter Phillips University or Oklahoma A. and M. college and will take a civil engineering course.

Warner was born September 23, 1923, to Frank W. and Stella (Tontz) Warner in Midco, Oklahoma. He graduated from Perry high school in 1941 and retired from Gillette Co.

He is survived by his wife, Dorothy Colleen (Holt) Warner, and son, Chris.