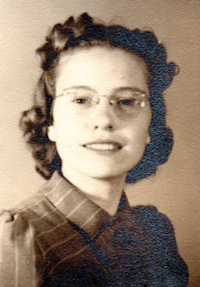 She served as president of her home room and as secretary and treasurer of the Red Hot Pep organization and was a member of the student council, band, Queen Esther Society, and glee club.

She received a student council honor pin and an award from the high school pep organization. Hobbies are dancing and collecting souvenirs.

Vedia plans to work during the summer and attend college in the fall. She expects to be an accountant.

Born December 20, 1923, to Charles Emmett and Ollie Mae (Crockett) Wakeman in Poteau, Oklahoma, she graduated from Perry high school in 1941.

On November 9, 1941, she and Russell Lee Gillogly were married. They were blessed to have shared 60 beautiful years together.

She worked as an accountant and enjoyed ceramics.

Preceding her in death were her parents and one sister, Evelyn “Winifred” (Wakeman) Lindley.

She is survived by her husband, Russell; daughters and son-in-law, Marsha Green, of McAlester, Oklahoma, and Sandra Lee and Don Bell, of Grand Junction, Colorado; and a grandson, Rusty Matsenbaugh; and a brother, Donald Lee Wakeman in Gainesville, Florida.