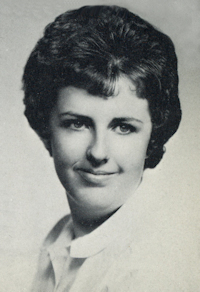 Karen Sue Keith, 55, Perry, died at 1 p.m. Thursday, April 25, 2002, at her home. Funeral will be at 10 a.m. Monday at the First Baptist Church with Rev. Buddy Hunt officiating. Interment will be in Grace Hill Cemetery under direction of Brown-Dugger Funeral Home.

She was born Aug. 16, 1946, at Stillwater to Floyd Raymond and Minnie Faye (Goodwill) Bay. A life-long resident of the Perry community, she was a 1964 graduate of Perry High School. On Jan. 5, 1964, she and Donald Roy Keith were married at the First Baptist Church in Perry.

She retired from Homeland after 22 years of employment. She was a member of the First Baptist Church. Active in the Perry Band Boosters from 1980-94 and had served as president and treasurer of that organization. She was a devoted bingo player. Her parents, grandparents and two brothers, Floyd Bay Jr. and Glen L. Bay, preceded her in death.

In addition to her husband, Donald, of the home, survivors are one daughter, Melinda Sue Keith, Perry; a son and daughter-in-law, Aaron Don and Patricia Keith, Perry; one grandson, Austin Keith Wehr, Perry; two brothers and sisters-in-law, Raymond and Lila Bay, Perry, and Donald and Wynema Bay, Orlando; two sisters and a brother-in-law, Charlotte and Art Rupp, Perry and Wanda Rink, Covington; one sister-in-law, Beverly Bay, Perry; sisters-in-law and brother-in-law, Clara and Eveartt Givens and Lenora Phelps, all of Perry; brother-in-law and sister-in-law, Herman and Betty Keith, Enid; and several nieces and nephews.