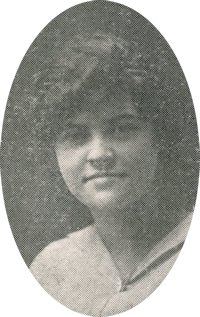 Loia has obtained her education in various places, having been here only three semesters.

“From little sparks may burst a mighty flame.”

Mrs. Loia Viola Schaeffer, 57, was found dead from a heart ailment Monday in her home at 341 NW 20 by a granddaughter.

Born August 18, 1898, in Tennessee to William Christopher and Mary Ellen (Huskey) Wheeler, she graduated from Perry high school in 1916. Following high school she attended the University of Oklahoma.

She and Hugh C. Schaeffer were married November 19, 1917. Following her graduation from the University of Oklahoma in 1919 they moved to Oklahoma City.

She was a member of the First Methodist church, the Holisso Study club and Beta Alpha Phi sorority.