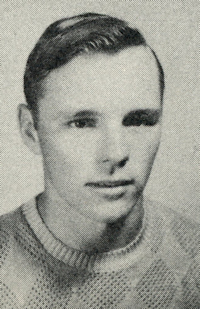 Graveside service will be at 10 a.m. Wednesday, March 8, 2000 at Grace Hill Cemetery in Perry. Kent Reubel, pastor of the Billings Christian Church, will officiate with Brown-Sisson Funeral Home in
charge. Memorials may be made to Hospice of Ponca City, 1904 N. Union, Suite 103, Ponca City, OK.

Boyd was born June 8, 1935 in Oklahoma City, the son of Ralph C. and Iva Mae (Gould) Boyd. He was a graduate of Perry High School and the University of Oklahoma.

He was married July 14, 1956 to Linda Brand at St. Rose of Lima Catholic Church in Perry. He had been employed as a petroleum engineer. He was a member of the Society of Petroleum Engineers and American Institute of Mechanical Engineers for 43 years.

Boyd was a licensed private pilot, a visiting professor for 22 years and taught various continuing education classes at Kilgore Junior College, Kilgore, TX; was a registered professional engineer in Texas and Oklahoma, was co-author of four textbooks for the Texas University engineering department and served on the TU continuing education board for 26 years; served as region manager for Sun Oil Company before retiring in 1987; started a pipeline services business in 1988 and was an independent oil operator for many years.

Survivors include his wife, Linda, of the home; a daughter and son-in-law, Clalyn and Gary Schaefer, The Woodlands, TX; two sons and daughters-in-law, David and Sallie Boyd, Keller, TX, and Alan and Lisa Boyd, Plano, TX; a brother and sister-in-law, Melvin and Pat Boyd, Ponca City; six grandchildren; and numerous nieces and nephews.

He was preceded in death by his parents and a nephew.