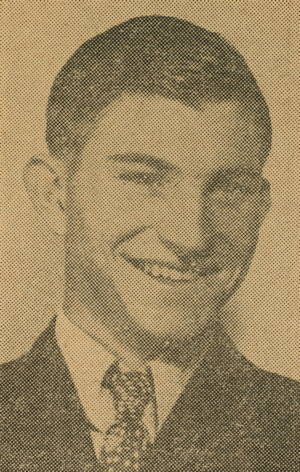 He attended Payne Center school in Payne county but has attended the Perry schools for the past six years.

He was a three-year letterman on the wrestling squad. Clem placed third place in the district wrestling tournament.

Double services will be at 3 p.m. Tuesday in the First Methodist church for Clem Yockey, 31, and William Samuel McKee, Jr., 18, brothers-in-law who died Saturday in Eureka, Kan., following a highway accident near there.

Rev. Bervin Caswell, pastor of the Methodist church, will officiate at last rites. Burial will be in Grace Hill cemetery under direction of the Parker funeral home. Members of Faith chapter, American War Mothers, will attend the services in a group.

Yockey was a veteran of Army service in World War II, and served overseas with a radar unit. He came to this county in 1936 with his parents and was a 1941 graduate of Perry high school.

Survivors in addition to his wife, son and parents, are two sisters, Mrs. Harold Hodge of route 3, Perry, and Mrs. L. V. Walker of Perkins.