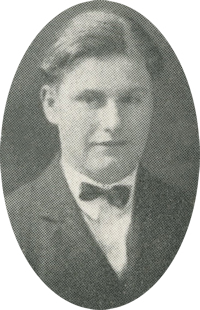 Funeral will be at 10:30 a.m. Tuesday at Colonial Chapel Funeral home in Stillwater with Rev. Mark Smith officiating. A graveside service is set for 2 p.m. Tuesday at Grace Hill cemetery in Perry. Memorials may be made to the charity of the donor’s choice.

Blecha was born Sept. 9, 1910, in rural Oklahoma county, the son of Frank Joseph and Mary (Peshek) Blecha. When he was two years old, his family purchased a farm located five miles north and a half mile west of Perry. He attended 4D rural school in Noble county and graduated from Perry high school.

He received a degree in animal husbandry in 1932 from Oklahoma A&M in Stillwater. While a college student, Blecha was a member of the Acacia fraternity. In 1935, he and Gladys Dudley were married at Enid. Blecha farmed in Noble county for a number of years and served on various farm programs. Blecha also was a master carpenter.

The Blecha family moved to Stillwater in 1960, where he was involved in the construction of several buildings on the campus of Oklahoma State university and residential housing on Kings Highway.

He worked as a carpenter until retiring in 1977. He was a member of Acacia fraternity and the Masonic lodge and was member and past noble grand of the Perry IOOF lodge.

Blecha was preceded in death by his parents, two sisters, Marie and Adeline Blecha; and one granddaughter Robie Gayle Smith.