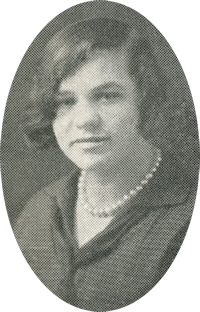 ﻿Funeral will be at 10:30 a.m. Friday at the First United Methodist church in Edmond for Nora Magnolia Hedges, 85, Edmond, relative of Perry residents. Burial will be in McGuire cemetery at Lucien under direction of Baggerley Funeral home of Edmond. Memorials may be made to Mercy Hospice, 4300 West Memorial Road, Suite 610, Oklahoma City, OK 73120.

Mrs. Hedges died Tuesday, May 9, 1995, in Edmond. She was born Jan. 19, 1910, at Hayward and was the daughter of George W. and Nora (Churchwell) Rutherford. A former rural schools grade school teacher, Mrs. Hedges had lived in the Edmond community since 1955. She was a member of the First United Methodist church and United Methodist Women and had participated in various volunteer activities in Edmond.

Mrs. Hedges was preceded in death by her husband, Gordon, on April 8, 1995. Her parents and seven brothers and sisters also preceded her in death.