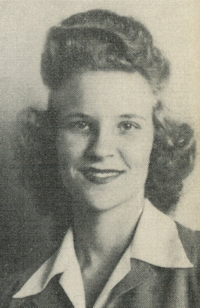 Funeral services have been entrusted to the care of Dighton-Marler Funeral Home of Perry. Visitation will be 9 a.m. to 8 p.m. Monday, June 24, 2019 at Dighton-Marler Funeral Home in Perry. Family will greet guests from 6 to 8 p.m. A celebration of Evelyn’s life will be held on Tuesday, June 25, 2019 at 11 a.m. at the First Methodist Church of Perry. Interment will immediately follow at Grace Hill Cemetery. Memorial donations may be made to the Oklahoma Medical Research Foundation.

Evelyn was born February 16, 1928 in Pampa, Texas to Marion and Mary (Gilmore) Shappell. Her family soon moved to Oklahoma and lived on the old Shell Oil Camp south of Lucien where they lived until they moved to Perry when Evelyn was in the seventh grade.

She graduated from Perry High School in 1946 and was a member of the PHS Band. While in high school Evelyn worked at Galloways Grocery. After high school she worked as a telephone operator for Southwestern Bell in Perry for a while before taking a bookkeeping job at McQuains Welding.

Evelyn and Leroy Coe were married July 20, 1959. From 1962 to 1967 they owned and operated E & L Café in Perry. After they closed the café Evelyn started working for the Perry Farmers Co-op as a bookkeeper where she worked from 1967 to the mid 70’s until her retirement.

Evelyn was a member of the Methodist Church in Perry and a former member of the church choir. She was also active in the Perry Memorial Hospital Auxiliary group. Her hobbies included dancing, camping, and spending time with her family and friends.

She was preceded in death by her parents; three sisters, Rose Mary St. Clair, Delores Myers, and Verna Smith.