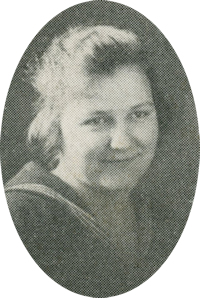 “The height of merriment, the depth of sympathy,
Each had a dwelling place in here.”

﻿Mrs. Bonnie Zoe Wetzel, wife of Leo Wetzel, living two miles north of Morrison died Tuesday night in a Guthrie hospital from a hemorrhage which resulted in blood poisoning. She was ill only two days. She was 34 years of age at the time of her death.

Mrs. Wetzel, daughter of Mr. and Mrs. E. J. Waltermire of Perry, was born in the Perry community and graduated from the Perry high school in 1920. She was married in December, 1921 to Leo Wetzel and has lived on a farm in Noble county since that time.

She was a member of of the Oak Grove farm women’s club and of the Christian church in Perry, being active in community and church work.

Besides her widower she is survived by four daughters, Bonnie, Leota Jane, Shirley Lee, Dorcas Lee and one son, James, all of the home. Her parents, Mr. and Mrs. E. J. Waltermire; one sister, Mrs. Elta Fry of Guthrie; and four brothers, Fred Waltermire of Houston, Tex., Jacob of Lafayette, La., and Elmer and Bob of Perry, also survive her.

Funeral services will be held at 2:30 Friday afternoon from the Christian church in Perry with Reverend Lappin of Enid in charge. Burial will be in the Grace Hill cemetery under direction of the Davis Funeral home.