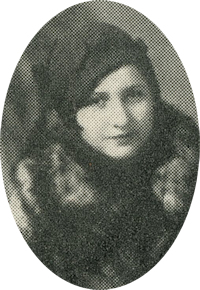 Funeral will be at 10 a.m. Monday in the chapel of Brown Funeral home. Rev. Cortez Cranfill, pastor of the First United Methodist church, will officiate. Burial will be at Grace Hill cemetery. Memorials may be made to the Oklahoma Medical Research Foundation.

She had been employed by Southwestern Bell Telephone company and was an Oklahoma Tax Commission employee for 20 years.

The Nidas lived in Chickasha and Muskogee before returning to Perry in 1976. Mrs. Nida assisted her husband in the management of the Progressive Apartments in Perry.

She was a member of the United Methodist church.

In addition to her husband, survivors include one son, Dr. Jerry Nida, Edmond; and three grandchildren.

Mrs. Nida was preceded in death by three sisters and four brothers.