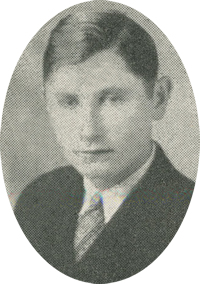 “Life may be short by I’m sure I’ll live long.”

Final rites will be at 2 p.m. Tuesday in Newton funeral home for Albert E. Cermak, 39, who died Sunday morning following a three-year illness.

Rev. Alger Fitch, pastor of the Ceres Christian church, will conduct last services. Burial will be in Bohemian cemetery, one mile north of Bohemian hall.

Cermak, a graduate of Perry high school in 1927, had been a patient in Ft. Supply hospital. He was born March 29, 1909, at the family home, 10 miles north and one mile east of Perry. Following graduation from high school here, he attended Oklahoma A. & M. college three years and worked on the home farm.

In addition to his parents, Florian Wesley and Anna (Hynek) Cermak, he is survived by six brothers and sisters, Mrs. Elizabeth Swart of the home, Mrs. Anna Sawrey of Denver, Adolph of Perry, Wesley of Britton, S. D., John of Weatherford, and Joe Cermak of Red Rock.