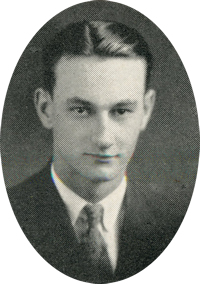 Yeager was born December 21, 1903, in Seymour, Iowa to Frederich H. and Annie Elizabeth (Wharton) Yeager. His mother died when he was three years old. In 1909 his father moved the family to Oklahoma where he married Myrtle Elizabeth Fairmont Henry in April, 2011. In 1919 the family moved from the farm into Perry where Kenneth attended school. He graduated from Perry high school in 1925 and attended Oklahoma University for two years. He took a business course at Draughan’s Business College in Oklahoma City in the spring of 1927 and went to work for the Marland Refining Company in Ponca City. He remained there until January 1929 when he was transferred to Marland’s District Office in Tulsa as a clerk when Marland Refining Company merged with Continental Oil Co. He resigned to go to work for Mid-Continent Southern Division in 1931.

On September 30, 1933, he and Donna M. Gilliam were married in Muskogee, OK. He became the chief sales clerk for a petroleum company.

He is survived by his wife, Donna, and two daughters, Sandra and Karen.