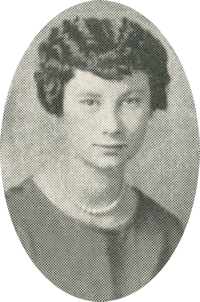 “She is always good-natured, good humored and free.”

Wilma Maxine Thrash, Tulsa, formerly of Perry, died Tuesday morning at her home. Graveside rites will be at 9:30 a.m. Thursday at Memorial Chapel at Tulsa.

Miss Thrash was born in Illinois and lived in the Perry community during her younger years. She was a graduate of Perry high school and obtained a journalism degree from the University of Oklahoma. She had been an employee of several newspapers, including The Perry Daily Journal, where she worked under direction of W. K. Leatherock.

While an employee of the public relations department of Carter Oil Company (Exxon), she received the Freedom Foundation of Valley Forge award for her biography of Colonel Carter, founder of Carter Oil Co.

After her retirement, she returned to the University of Oklahoma where she obtained a masters degree in library science. She then served as acting director of the Tulsa University law library until she retired a second time.