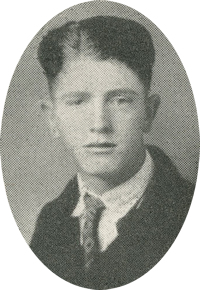 “Why hurry through life.”

Stanislav was born July 13, 1909, in Perry, the son of Alois and Emma Stanislay. He attended Perry schools and graduated from Perry high school in 1927, the beginning of the Great Depression. He joined the 101 Ranch Wild West Show as a member of the Capt. Swift Zouaves Drill Team from 1929-1931. While performing in Washington, D.C. in 1931, the show went broke and Stanislav hitchhiked home on a freight train.

On May 13, 1933, he married Iva Myrtle Dayton. He worked at John’s Grocery as a delivery boy and while employed there, learned to be a meat cutter. He opened his own grocery store in 1937. Stanislav’s Grocery and Market was located on the east side of the Perry square until 1959.

Stanislav was a veteran of World War II. He served with the U.S. Army from 1944 to 1946. While on active duty, he was stationed at Camp Robinson at Little Rock, AR, as a mess sergeant. He was a National Guard member prior to being in the army.

He was a member of the American Legion, the International Order of the Odd Fellows, the United Methodist church in Perry, Blackwell and Prague. He was also a member of the K. C. Club in Prague and a past member of the Lion’s club in Perry.

Stanislav owned and operated the Ranch Motel in Blackwell from 1960-1976. After selling the motel, he retired to an acreage near Prague.

Preceding him in death were his parents, two sisters, Emma Barton and Eva Cumings, and two great-grandchildren.

Survivors include his wife, Iva, of the home in Prague; son and daughter-in-law, Jerry and Binnie Stanislav, Moore; daughter, Freda Dechant, Shawnee; six grandchildren; two great-grandchildren; and one nephew.