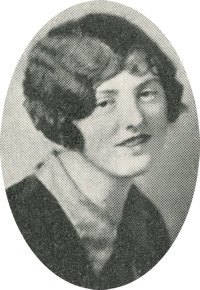 “She has stolen one man’s heart.”

﻿Graveside rites will be at 10 a.m. Saturday for former Perryan, Emma Barton, 83, who died at 4 p.m. Thursday at her home at Del City.

Rev. Jim Gentry, of the First Baptist church of Perry, will officiate. Arrangements will be under direction of Brown Funeral home.

She was a Baptist and a member of the Rebekah lodge and the American Legion Auxiliary.