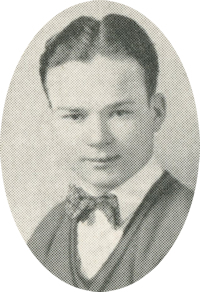 “The natural man does not want fair play;
he wants his side to win.”

Born June 25, 1907, in Perry, to Dr. Eugene and Katherine (Maroney) Osborne, he graduated from Perry high school in 1927. He was a well known during his high school years as a chalk talk artist who gave special programs at various high schools in the state. After high school he expanded his tours to other states and attended a business college in Oklahoma City.

Osborne and Becky Jane Ritchie were married on September 27, 1929. They originally made their home in Oklahoma City where he had his own business as an efficiency expert. At the time of Osborne’s death they lived in Memphis.

He is survived by his wife, Becky.