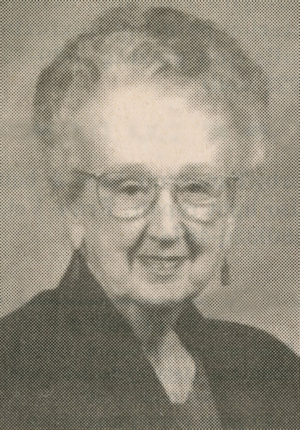 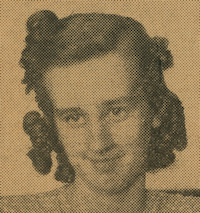 – 17 years old, is the daughter of Mr. and Mrs. Charles W. Postelwait, route one, Perry. She was born August 23, 1922 in Perry. Before attending the Perry school she has attended school in Painesville, Ohio.

Dorothy’s plans for next year are undecided.

She was born August 23, 1922 in Perry, Oklahoma to Charles Wesley and Hazel Ann Scott Postelwait and attended schools in Perry until her graduation from Perry High School.

On November 8, 1945, she married James D. Pontious at Perry. They had three children, David Wesley Pontious, who died as an infant, James Michael Pontious of Enid and Patricia Ann Gahren of Colorado Springs, Colorado. She worked as a telephone operator for Southwestern Bell, Conoco Oil and St. Mary’s Hospital, retiring in 1986. The family moved to Ada, Ponca City, Enid and Madill until 1989, when she moved back to Enid. She was a member of Cornerstone Baptist Church, Enid.

Surviving are one son, J. Michael Pontious of Enid, one daughter Patricia A. Gahren of Colorado Springs, Colorado; one brother Richard E. Postelwait of Perry; one sister Barbara Blair of Enid; and six grandchildren.

She was preceded in death by her husband, an infant son, one brother and one sister.