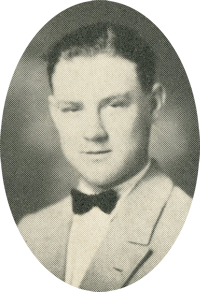 “If he ever falls in love, great will be the fall thereof.”

John Merrell, Tulsa and formerly of Perry, died Thursday in Tulsa where he had lived the past several years.

Funeral was a 2 p.m. Saturday at the Whisenhunt funeral home at Tulsa with burial at a Tulsa cemetery.

Merrell was born on April 8, 1910, the son of Charles Durham and Mary Alice Maude (Mateer) Merrell. He graduated from Perry high school in 1927 and attended 3 years of college.

He worked as a mail carrier and deputy in the Noble county treasurer’s office before moving to Tulsa.