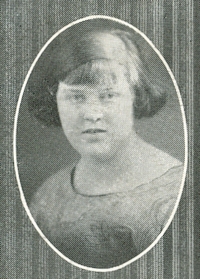 Funeral will be at 2:30 p.m. Tuesday in the First Christian church with Rev. Michael Beasley, pastor of the church, officiating. Burial will be in Grace Hill cemetery under direction of Newton funeral home.

Mr. and Mrs. Adams were taken to Perry Memorial hospital by fire department ambulance following a fire in their home Jan. 12. Adams was transferred to Enid St. Mary’s hospital, where he died the following day Mrs. Adams had been an invalid for 19 years.

She was born March 16, 1905, seven miles west of Orlando to the late Mr. and Mrs. E. V. Nida. She was graduated from Perry high school in 1925. She began teaching in Noble county schools in 1926 and continued for nine years. Mrs Adams was a member of the First Christian church.

In addition to her husband, she was preceded in death by one son, her parents and one brother.
Memorial contributions may be made to Medical Research, the memorial fund of the First
Christian church or individuals choice. The funeral home will serve as custodian of funds.