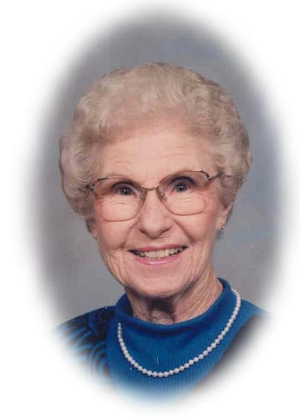 ﻿Eileen B. Merrill, of Perry, was the daughter of Lewis Milton and Grace Lee (Cockrum) DeVore. She was born on November 14, 1913 northwest of Perry and died Sunday, February 15, 2004 at The Fountains at Canterbury in Oklahoma City, Oklahoma.

She attended Lone Star grade school northwest of Perry through the 8th grade. She graduated from Perry High School in 1931 and from Central State Teachers College in Edmond in July of 1936.

She and Joseph “Joe” F. Merrill were married August 23, 1936 in Enid, Oklahoma. They lived northwest of Perry for 37 years where they farmed and raised cattle. August of 1973 they moved to Perry.

She was an active member of the First Christian Church, Christian Women’s Fellowship and the Builders Sunday School Class. She was a charter member of the Elkettes and has helped many young people through the Elks Scholarship Foundation, which she and Joe started.

Funeral services will be 2:00 p.m. Wednesday, February 18, 2004 at the First Christian Church. Rev. Martin Foster will officiate. Interment will be in Grace Hill Cemetery. Services are under the direction of Brown-Dugger Funeral Home. Memorials may be made to the Perry Elks Scholarship Fund, First Christian Church Building Fund, or the Good Shepherd Hospice in care of Brown-Dugger Funeral Home.

She was preceded in death by her husband, her parents, and one brother.