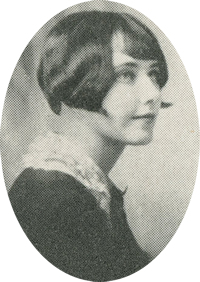 Services will be at 2 p.m. Monday in Crown Heights Christian church, 4020 N Western, with burial in Memorial Park cemetery under the direction of Guardian funeral home. In lieu of flowers the family suggests that contributions may he made to the Oklahoma Medical Research foundation, cancer division.

Born June 2, 1910, in Sumner, Mrs. George graduated from Perry high school in 1927, attended Oklahoma College for Women, and graduated from the University of Oklahoma. She taught school in Perry and Ponca City prior to her marriage to T. Houston George, Jr. on June 18, 1938.

Surviving are her husband, T. Houston George, Jr.; a son, Thomas Houston George III, of the home; a daughter, Mrs. Donald Keith Ferguson, 1115 NW 21; her mother, Mrs. Nellie Stewart, and a sister, Mrs. Booth B. Strange, both of Shreveport, La.