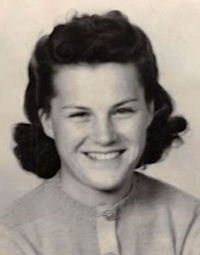 Employment in the telephone office is included in post-school plans of Mary Glynn Munger, 18, who was born in Perry and has spent all of her years here.

She is the daughter of Mrs. and Mrs. William A. Munger, 626 Holly, and her father is stationed in Alaska with an electrical engineering division of the army.

She attended Perry elementary school before four years at Perry high school, where she was a member of the Red Hots for two years.

Mary Glynn Munger was born April 14, 1925 in Perry, Oklahoma, to Edna Mae (McCracken) and William Andrew Munger. She died quietly in her sleep on August 11, 2015. Glynn graduated from Perry High School. She married William Fred Cochran in 1946 and they were married for almost 50 years, until his death in 1995. They had four children: Jeanie, Gayle, Marion, and Carol.

Glynn had many interests that included reading, creative writing, painting, writing letters to friends and family, and listening to classical and gospel music, but her favorite activity was sewing. She was an avid knitter and quilter.