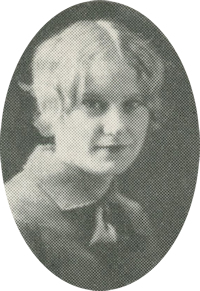 Born May 4, 1910, north of Perry, Mrs. Frank was the daughter of Gustav and Helena Robeoltmann. She was a 1929 graduate of Perry high school. She and Charles Gottlieb Frank were married on March 8, 1932, at Perry.

Mrs. Frank worked as a bookkeeper at Nelson Drug, Bontrager Drug and Chris’ Pharmacy. She was a member of Christ Lutheran church.

She was preceded in death by her husband in October, 1965; one brother, two sisters and one nephew.