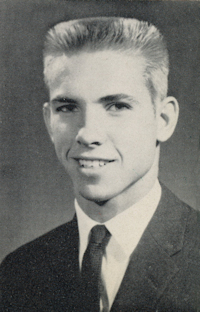 Michael Richard Brown of Edmond formerly of Perry, was fatally injured in a one-car accident south of Edmond shortly before midnight Monday. He was 32. Members of the family here said the accident occurred during a rainstorm while Brown was returning to Edmond from Norman where he has been doing graduate work at the University of Oklahoma. He was alone in the car when he lost control and struck a tree.

Funeral will be at the Baggerley chapel in Edmond Thursday at 10:30 a.m. Burial will be in Memorial Park cemetery.

Brown graduated from Perry high school in 1960 and was known as Mike Simon during his residence in Perry.

Brown had lived in Edmond 10 years and was graduated from Central State university in 1969.

Besides his mother, sister and brother here, survivors include his wife of the home in Edmond; three children ages 6, 4 and 7 months, and his grandmother. Mrs. Viola Williams of St. Joseph, Mo.