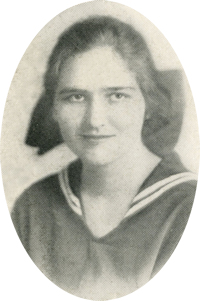 “Tis modesty that makes her most admired.”

Graveside rites will be at 2 p.m. Friday at Grace Hill cemetery for Carol Brock, 80, Glendora, Calif., formerly of Perry, who died Tuesday at Sierra Madre where she had been hospitalized.

Rev. M. R. Work, pastor of the First Christian church, will officiate. Arrangements will be under direction of Parker-Brown Funeral home.

The daughter of M. G. and Maude Kinnick, she was born Dec. 20, 1903, at Perry. She was a graduate of Perry high school and Central State university.

A resident of California since 1939, Mrs. Brock had been a Sears employee for 20 years. She was a member of the Christian church.

She was preceded in death by her husband, one son, Gene, and one sister, Vera Johnson.