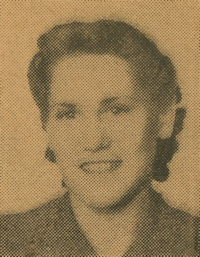 Mrs. Jirous, was Miss Janiece Johnson, the daughter of Mr. and Mrs. Charles G. Johnson of Sumner, before her marriage this year. She was born April 13, 1922 in Perry and attended the Sumner grade school before attending the Perry high school.

She was a member of the high school pep organization for three years and an active member of the Order of Rainbow for Girls. She was a band queen candidate in her freshman year.

Cremation service will be Wednesday at Ivy lawn cemetery at Ventura, Calif. The family has asked contributions be sent to the Oklahoma medical research foundation for use in leukemia research.

Born April 13, 1922, in Perry, Mrs. Bolder was a graduate of Perry high school and a graduate of Oklahoma College for Women at Chickasha. She was the daughter of the late Charles G. Johnson and Mrs. Vera Johnson. 814 Delaware street.

Survivors other than her mother of Perry include her husband of the home; one daughter, Mrs. Janiece Maureen Kunki, Ventura, Calif.; one brother, Ludwig Johnson, Perry; one sister, Mrs. Verona Southern, Greenacres, Wash.; and two grandchildren, Kim and Heidi Kunki, both of Ventura.