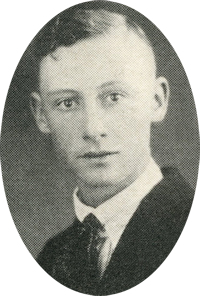 ﻿Funeral arrangements were pending at Parker Funeral home for Byron B. Bartow, 69, long-time Perry businessman and public official, who died at 7 a.m. Friday at Perry Memorial hospital. Bartow had been in ill health for the past 15 years but continued to be active.

He served as undersheriff for the late Sheriff Merl Harman for a time, had been a member of the Noble county excise board, was formerly secretary of the county election board and previously served as a deputy in the county treasurer’s office.

Bartow served as manager of Stillwater Mill in Perry more than 30 years ago and operated a restaurant on the west side of the square for 15 years. Later he operated the Sonic Drive-In.

He was a member of the 101 Ranch band, was in the famous Perry band directed by the late Dr. W. C. Marshall and was drum major for a local American Legion band which gained considerable fame in the state.

He was preceded in death by one granddaughter.

A memorial fund has been established for the Oklahoma Medical Research Foundation.