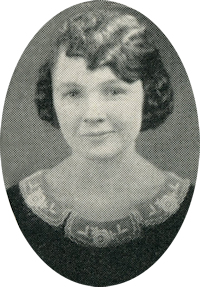 “A rose with all its sweetest petals yet folded.”

Funeral will be at 10 a.m. Tuesday in the Baggerley Marler-Primrose Memorial chapel. Burial will be at Mt. Carmel cemetery near Perry. Memorial may be made to the building fund of St. Luke’s United Methodist church of Moore.

Mrs. Abbott was born Dec. 24, 1906, near Perry to Ralph Adrian and Goldie Agnes (Whitley) Lattin. She was a member of the girls basketball team while a student at Perry high school and played piano for the Catholic and Baptist church and at early movies in Perry.

She attended Oklahoma State university and later taught in a one room school in Noble county. She was married to Ben F. Abbott in 1927 and the couple moved to the Kansas City area where they operated a gas and food operation until the depression.

At that time, the Abbotts moved back to Oklahoma where he was employed as part of a Gulf Oil company seismograph division crew. Mr. and Mrs. Abbott moved with the crew to areas in southwest Oklahoma, New Mexico and Texas. They later moved to the Gulf Oil camp at Three Sands, Oklahoma.

She worked for the Census Bureau, was postmaster at Three Sands and was one of the early members of the Methodist church that was established in the Three Sands camp. She was a member of the school board, sponsored 4-H clubs and other youth activities and won ribbons at the county fair for her cooking and sewing entries.

In 1952, the Three Sands Oil field was closed. The Abbotts then moved to the Edmond area where he worked at Gulf Oil company leases. Mrs. Abbott worked in retail at Halliburton Clothing Store in downtown Oklahoma City and later was employed by Kerrs Department Store prior to beginning work at Brown’s Department Store. At Browns, she was a bridal consultant until retiring in 1972.

Following the death of her husband in 1972, Mrs. Abbott continued to live in Edmond until she became a resident of Hillcrest Living Center in Moore. She was a member of St. Luke’s United Methodist church.