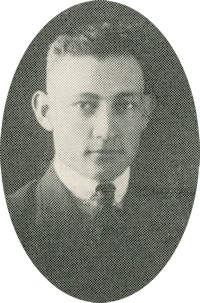 “To those who talk and talk
This motto should appeal
The steam that blows the whistle
Never turns the wheel.”

﻿Funeral services for Edwin F. Bechtold, 59, chief of police in Newkirk, Oklahoma, since 1950, were conducted Thursday afternoon in the Newkirk Methodist church. Interment was in the Newkirk cemetery.

Bechtold died Tuesday in the Veterans hospital in Wichita, where he had been a patient the past month.

During World war II, Bechtold was employed at Strother Field near Arkansas City, Kan., and at Will Rogers Field, Oklahoma City.

Prior to being named chief of police here, he engaged in the grocery business and for one year served as jailer of the Kay county jail in Newkirk.

He is survived by his wife, of the home; a daughter; four sons, including Don Bechtold, Newkirk; a sister, Mrs. Clifford Boggat and a brother, John Bechtold, both of Perry.