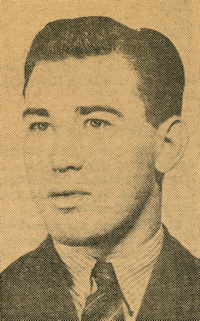 He is interested in football and basketball. For honor awards, he received a letter jacket, silver and gold football.

Hobby is fishing. After his graduation from high school he plans to work.

After high school he had schooling in welding and was a welder for Lockheed until he entered the Navy in WWII where he was an undersea welder. He cut up ships to clear Pearl Harbor.

He married Antoinette Nowicby and had no children. They lived in Van Nuys, CA. His wife died in 1991.

Abraham was a 32nd degree Mason. He was President of Local 51, Welders Division of the International Union of Operating Engineers (IUOE).