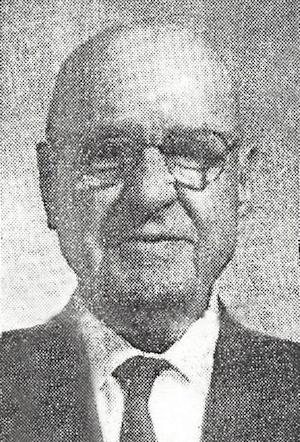 Everett E. Nelson, 87, 609 Fourteenth street, one of Perry’s oldest and best known businessmen, died at 6 a.m. Friday in Perry Nursing home where he had been a patient.

Funeral will be at 2:30 p.m. Monday in the First United Methodist church with Rev. Tom Kirby, pastor, officiating. Burial will be in Grace Hill cemetery under direction of Parker Funeral home.

Nelson came to this county in 1893 with his parents, the late Mr. and Mrs. Jacob Nelson, who made the run at the opening of the Cherokee Strip. They settled on a claim north of Perry.

Nelson was a member of the first eighth grade graduating class in Noble county and was a graduate of Perry high school. He had been a pharmacist since 1904. He went into the drug business with the late Ralph Foster in 1913 and opened his own business in 1916. He operated his store on the south side of the square in the building now occupied by City Hall, until his retirement in 1953.

He was born Jan. 17, 1883, in McClain county, Ill. He was identified with civic affairs in the community throughout his life. He served three terms on the school board, was a member of the building committee for Perry high school, was on the Masonic building committee and was one of those who served as a building group for the present First United Methodist church of which he was a member. He was a Mason for 50 years and held life membership. He was a long-time member of the Perry Rotary club.