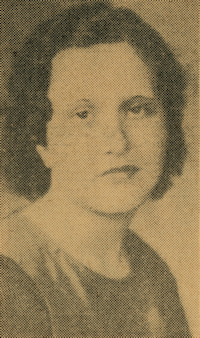 – daughter of Mr. and Mrs. John Nemec of Perry, was born in Perry on Nov. 6, 1919 and attended the elementary grades in Fairview, dist. 30, a rural school. She attended high school in Perry. Following graduation she expects to become a telephone operator.

Funeral services will be at 10 a.m. Tuesday, Oct. 16, 2001, at Zion Lutheran Church, east of Perry. Pastor Ben Mirtz will officiate. Interment will be at Grace Hill Cemetery under the direction of Brown-Sisson Funeral Home.

Mrs. Lampe was born Nov. 6, 1919, to Czechoslovakian immigrants John and Christiana Nemec. She attended country grade schools outside of Perry and graduated from Perry High School. She worked as night chief operator of the telephone company in Perry in the 1930s and early 1940s.

In the 1960s she wrote the Sumner news column for area newspapers.

She was a member of Zion Lutheran Church, where she particularly enjoyed the friendship and support of the women in Circle I. She also enjoyed numerous day trips by bus to regional areas of interest..

She was preceded in death by her husband; a daughter, Norene Gayle (Mrs. Don) Williams; a sister, Leona Henry; and two brothers, Ed Nemec and Stanly Nemec.