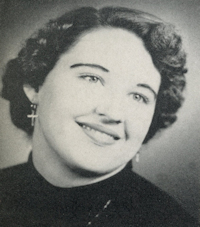 Funeral will begin at 10 a.m. Tuesday in the chapel of Poteet Funeral Home at Pawnee. Graveside rites will start at noon Tuesday at St. Rose of Lima Catholic cemetery at Perry. Rev Kevin Devlin will officiate.

Mrs. Novotny was the daughter of J. B. and Elizabeth (Alexander) Smith. She was born at Maramec, Oklahoma on Jan. 8, 1937. She was a 1955 graduate of Perry high school.

She and Joseph L. Novotny were married on June 16, 1954, in Perry, where they made their home.

In addition to her husband, of the home, survivors include two sons and a daughter-in-law, Danny Novotny and Bob and Sandy Novotny, all of Perry; and one brother, Clarence Smith, Hallett, Oklahoma.

He parents preceded her in death.