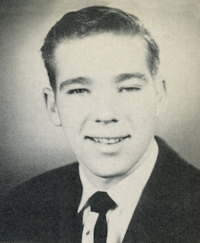 Wesley Ross, 44, Perry resident most of his life, died Monday at Tulsa.

Funeral will be at 10 a.m. Thursday at Parker Funeral home with Rev. M. R. Work, pastor of the First Christian church, officiating. Burial will be at Grace Hill cemetery.

Ross was born at Perry, Nov. 11, 1936, the son of Bill and Marie (Pricer) Ross. He was a 1955 graduate of Perry high school and served three years with the United State Army. He was a member of the Christian church and the American Legion.

Ross was preceded in death by his mother.