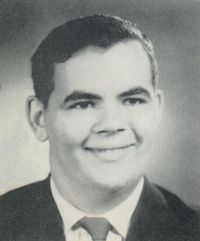 Wilbur Joseph “Joe” Savoie, 45, was discovered dead at his home at 107 South Tenth street, early Saturday afternoon. Death was due to natural causes.

Savoie was born Jan. 28, 1937, in Perry. He was a graduate of Perry high school and served in Vietnam with the United States Navy. He was a member of St. Rose of Lima Catholic church, the Ellis-Jirous American Legion post and Disabled American Veterans.