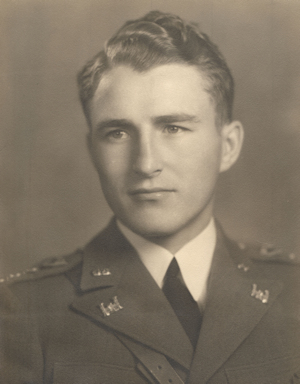 Harold Jack St. Clair, born November 18, 1917, to Harold Mack and Laura May (Wurtz) St. Clair in Delaware, OK. He started school in Springdale, AK before transferring to Enid, OK and eventually Perry in about 1930. Jack graduated with honors in 1935 participating in numerous school activities including wrestling for Ueal Leach and John Divine during the early 1930’s. Upon graduation he enrolled at Oklahoma A&M (now Oklahoma State University). Jack wrestled under Ed Gallagher, was editor of the student newspaper, and began what would be his lifetime vocation via the R.O.T.C. (Reserve Officer Training Corps). Jack graduated in 1939 with a degree in Civil Engineering and was commissioned a Second Lieutenant in the United States Army Corps of Engineers.

Jack’s career in the Army spanned almost 30 years and included at least 5 foreign deployments (two in Europe and three in the Pacific). These tours included WWII, Korean War, and the Viet Nam War. He landed at Normandy on Day 2. Jack assisted in the design and erection of the ‘Mulberries’ that were utilized to create the ‘man made’ harbors required by the allied armies. These harbors were instrumental in getting the required equipment (i.e.: tanks, trucks, jeeps, ammunition, food, etc.) unloaded and ashore during the European invasion. His tour in Viet Nam overlapped those of his two sons (Capt. David M. St. Clair and Lt. Harold J. St. Clair Jr.). Jack commanded numerous Engineer units, was on the staff of the Department of the Army General, and on assignment as the Omaha, NE District Engineer. Jack was awarded numerous decorations to include the: Bronze Star with 3 Oak Leaf Clusters, French Croiz de Guere with Silver Star, Vietnam Medal of Honor, and Legions of Merit with Oak Leaf Cluster.

He also had a Masters of Science in Petroleum Engineering from the University of Pittsburgh and a Masters in Political Science from George Washington University.

Jack married Theodore Gwen Price on June 13, 1942 in Stillwater, OK. In addition to their two sons mentioned above, they also have two daughters, Dorsey Diane St. Clair and Rebecca Sue St. Clair. He was predeceased by his parents. His brothers are Hugh (deceased), Don (deceased), John (of Perry, OK) and Tolbert (deceased).

Jack died on April 9, 1989 and is buried at Arlington National Cemetery.