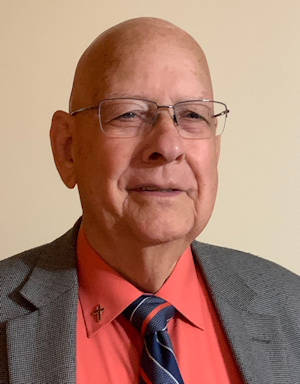 Reverend Dell J. Crockett was born October 10, 1931, the fifth of eight children, to Ernest & Marguerite [nee Atherton] Crockett, on the Crockett Farm, seven miles south of Perry, located on what was once known as the “CCC Road.”

His years at Perry High School were precious years under the guidance of gifted and influential educators. During the late 1940s, the public school system allowed Pastors and/or Religious Leaders to teach Religion Courses during the “Study Hall” hour. Student attendance was strictly on a voluntary basis. Pastor Arnold J. Brase, Christ Lutheran Church in Perry, taught subjects such as “The Authority of the Word of God,” “The Biblical Doctrine of Holy Baptism,” “Jesus’ Institution of the Sacrament of the Altar,” etc. Pastor Crockett attended all those voluntary courses. Pastor Brase was significantly instrumental in Pastor Crockett’s desire to become a Pastor in the Lutheran Church-Missouri Synod.

Pastor Crockett graduated from St. John’s Preparatory School in Winfield, Kansas, after three years of study in Liberal Arts, Theology, and becoming proficient in the use of the Greek, Latin, German, and Hebrew languages. He graduated from Concordia Theological Seminary in St. Louis, Missouri after five more years of study in Theology and Ancient Languages. His fifteen months of Vicarage or Internship were spent at Zion Lutheran Church in Hastings, Nebraska and at St. Paul’s Lutheran church in Doniphan, Nebraska.

Pastor and Adeline [nee Kroger] were married at Zion Lutheran Church in Hastings, Nebraska on Sunday June 2, 1957. She was a Dental Assistant at that time. She is still a Mary-Kay Cosmetic Beauty Consultant for more than forty years.

Pastor Crockett graduated from Concordia Seminary on June 4, 1957; and, was Ordained as a Lutheran Pastor on July 14, 1957 n Humboldt, Nebraska. Pastor & Mrs. Crockett have served Lutheran Congregations from Texas to North Dakota and from Georgia to California. Pastor Crockett taught Second-Year-Level Greek at McMurray University in Abilene, Texas. He has been a Lecturer at District Conferences; Civilian Chaplain at two Air Force Bases; and a Synodical Officer for many years. Pastor and Adeline are the parents of three sons; one daughter; six grandchildren; and three great-grandchildren.

Pastor Crockett retired from the Lutheran Ministry on 31 July 1998, while in San Fernando, California; and, moved to their current home which they purchased in St, Louis, Missouri. In February of 2002, Pastor Crockett accepted the Divine Call to become Pastor of Grace Lutheran Congregation in Pagedale, a suburb of St. Louis, Missouri. In 2017, the African Diaspora Council, a Not-for-Profit Corporation, which enables immigrants from many nations to become New Americans, makes its Headquarters at Grace Lutheran Church. Pastor Crockett will continue to serve the Lutheran Church-Missouri Synod as long as health and stamina endure.