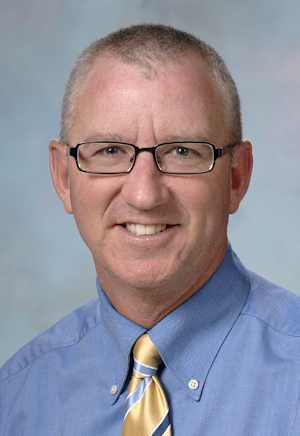 Mike Kirk is a 1978 Perry High School graduate who spent five years in the newspaper business before embarking on a long career in the athletic department at the University of Central Oklahoma (UCO).

A wrestling letterman and two-year golf starter for the Maroons, Kirk got his journalism start at the Perry Daily Journal. He covered various PHS sports for the PDJ from his freshman year in 1974 until a senior in college in 1981.

Kirk was a student assistant in the sports information department at Oklahoma State for four years before graduating in 1982 with a Journalism degree. He went to work as a sportswriter at the McAlester News-Capital and Democrat in August of 1982 and spent a year there before moving on to the Lawton Constitution.

Kirk covered local high school sports as well as OSU football and the Dallas Cowboys during his four-year stay in Lawton. He took over as sports information director at UCO on Nov. 2, 1987 and spent the next 29 years there, the final 15 as assistant athletic director for media relations.

Kirk was an active member of the College Sports Information Directors of America who served on several committees. He earned 60 CoSIDA publications awards, including 27 “Best in the Nation” citations.

Though never a successful wrestler while at PHS, it’s a sport he has admired virtually his entire life. Kirk worked as the Press Information Manager for Wrestling at the 1996 Olympic Games in Atlanta, Ga. and was a member of the NCAA Division II Wrestling Championships committee for six years, including three as the chair. He was inducted into the Oklahoma Chapter of the National Wrestling Hall of Fame in 2012.

Kirk retired from UCO in the summer of 2016, though he has worked in a part-time role with the media relations department since shortly after his retirement and stays active as a special assistant for the NCAA Division II Wrestling Championships every year.

CoSIDA inducted Kirk into its Hall of Fame in 2018 and he also received the Lifetime Achievement Award from the national organization.

Kirk is the son of the late Jess and Ida Nell Kirk. He and his wife Debbie have been married for 30 years and have two children – Alex, of Edmond, and Jessica Schram, of Covington.