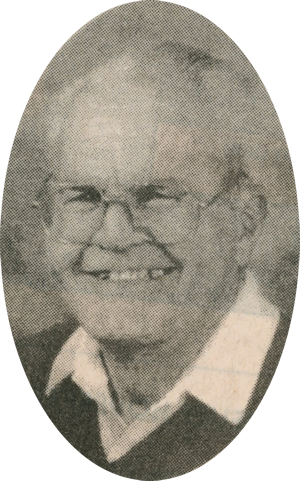 He attended grade school at the Perry Lutheran school, but has not been in any schools outside of this city. He has been active in FFA work as a student of PHS.

Upon graduation, Ronald expects to take training at the U.S. Marine base at San Diego, Calif. His ambition after the shooting is over is to buy a farm and “start out on my own.”

While he was an infant, his parents moved to Sudan, Kansas, another oil town. Several moves later brought them to Perry, Oklahoma. Ronald stayed in Perry until 1945 when he enlisted in the United States Marine Corps immediately after graduating from Perry High School. While on the rifle range at Parris Island, South Carolina, the war ended. After serving a tour of duty in Hawaii, Ronald was discharged to the USMC Reserves.

Upon reenlisting in the military in 1949, he was posted to the M.C. Recruit Depot in San Diego, California. From there, he was transferred to Subic Bay, Philippines. At the onset of the Korean War, Ronald was transferred to Kobe, Japan where the First Marine Brigade was being formed for the landing at Inchon Harbor, Korea.

After a six-months tour at Camp Matthew Marine Corps rifle range in San Diego, Ronald was promoted to Staff Sergeant and ordered to Headquarters M.C. to become a security guard at an embassy of the United States. After being posted to the embassy at Oslo, Norway for one year, he was ordered to Quantico, Virginia to be commissioned a Second Lieutenant and undergo a six-months officer’s training course.

From Quantico, he went to the Second Engineer Battalion, Second Marine Division at Camp Lejeune, North Carolina. From there, he was ordered to the Engineer Officers basic course, U.S. Army, Fort Belvoir, Virginia. After completion of the four months course, he returned to the Second Engineer Battalion and participated in exercises in Labrador and NATO exercises in Turkey. Ronald was promoted to First Lieutenant after completing exercise in Labrador.

Upon returning to Camp Lejeune, he was ordered to Fort Belvoir to join the staff and faculty of the engineer center. During his three-year tour at Belvoir, he met and married his beloved wife, the former Mary Catherine Shirk. The Hambys were married on November 30, 1956 at Fort Belvoir, Virginia. Another bonus of that tour of duty was a promotion to Captain.

From Belvoir he transferred to the first Pioneer Battalion, First Marine Division, Camp Pendleton, California where he took command of a Pioneer company. From the First Division he went to the M.C. Recruit Depot, San Diego, where he served a three-year tour as Base Maintenance Officer before becoming Training and Logistics Officer of the First Recruit Training Battalion. After his tour in San Diego, he went to Vietnam where he served a 13-month tour before returning to Quantico, Virginia where he retired on June 30, 1967.

After working for the City of El Cajon, California for 21 years as the zoning compliance officer, he retired again and he and his wife returned to make their home in Perry. Ronald was a member of Christ Lutheran Church.

Memorial services will be at 11:00 a.m. Tuesday, June 22, 2004 at Grace Hill Cemetery. Rev. William Metz will officiate. Memorials may be made to Judith Karman Hospice in care of Brown-Dugger Funeral Home.

In addition to his wife, Mary, survivors are one son, Robert W. Hamby; one daughter, Donna Lamb, of Carlsbad, California; one brother, Arthur Hamby and his wife, Bonnie, of Perry, Oklahoma; one sister, Norma Joan Knott and her husband, Otis, of Perry, Oklahoma; five grandchildren; and extended family, Diane Palmer and children, of Oklahoma City, Oklahoma.

His parents and one daughter, Peggie Anne Hamby, preceded him in death.