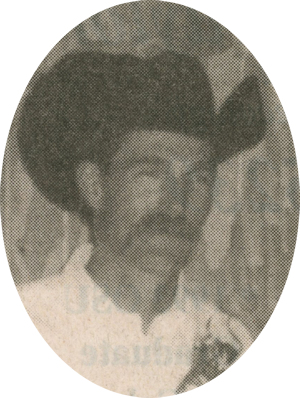 Douglas Lee Harney, 36, of Aspermont, Texas, formerly of Perry, Oklahoma is the son of Bill and Jan (Leathers) Harney. He was born October 10, 1969, at Alva, Oklahoma, and died Saturday, December 3, 2005, near Aspermont, Texas as the result of a traffic accident.

Doug accepted Christ as his Lord and Savior as a teenager. He loved the Lord in wide open spaces. Oftentimes he would take his hat off and kneel in prayer on the open range.

He was a 1987 graduate of Perry High School and earned an Economics and Animal Science degree from Oklahoma State University in 1989. Doug was a cowboy employed by the Scribe M. Ranch in Stonewall County, Texas.

On October 2, 2004, he and Jennifer Martin were married in Spur, Texas.

Memorial Services will be at 2:00 p.m. Saturday, December 10, 2005 ath the First Christian Church in Perry, Oklahoma. Memorial contributions may be made to the Doug Harney Scholarship Fund.