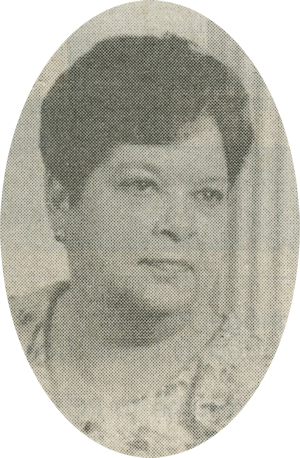 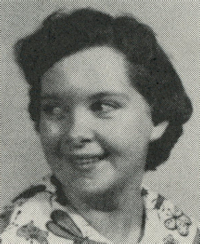 ﻿Virginia Lee “Gini” Piel, 63, was called home to eternal rest by her Lord and Savior on February 23, 2004, after a short, but courageous battle with cancer. Gini was born January 9, 1941, to V. Roy Bross and Avis L. Sally (McLain) Wallace, in Fairplay, Colorado.

She grew up in Palmyra, Missouri and in Perry, Oklahoma and was a graduate of Perry Senior High School. In 1957, Gini married Kenneth M. Piel at Christ Lutheran Church in Perry. Gini and her husband moved to, Brighton, Colorado and subsequently moved to Baton Rouge, Louisiana where her husband worked for Shell Oil Company before earning his Masters Degree at Tulane University. In 1965, Gini moved again with her husband to Vancouver, British Colombia, while Mr. Piel completed work on his Ph.D.

Gini subsequently lived in Perry, Oklahoma and in Tustin, California, working in the California state court system, before returning to Perry with her sons Marty, Loren and Jim in 1974. In 1982, Gini moved to Stillwater to work at BancFirst as a teller. Gini was a committed Christian and a communicant member of Zion Lutheran Church of Stillwater. Gini treasured the relationships she developed with her long-time customers at BancFirst over the years, and derived a great deal of pleasure from the many close friendships she cultivated among her co-workers.

Funeral services will be 2:00 p.m. Friday, February 27, 2004 at the Christ Lutheran Church. Rev. William Metz will officiate with assistance from Rev. Carlton Riemer and Rev. Robert C. Preece. Interment will be at Richburg Cemetery. Memorial contributions may be made to the Piel Memorial Foundation and designated for the Virginia Lee Piel Memorial Scholarship Fund.

Gini is survived by three sons and their families, Marty and Sherry Piel and their daughters Shiloah and Mallory Jo, all of Perry, Oklahoma, Loren and Brigette Piel and their sons, Hayden and Garrett, all of Las Vegas, Nevada, and Jim and Krysti Piel and their sons, Shane and Justin, all of Dallas, Texas; one sister, Jeanie Coleman of Wichita, Kansas and one brother, Larry Wallace of Billings, Oklahoma.

She was preceded in death by her father and mother.