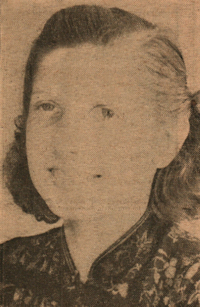 – daughter of Mr. and Mrs. George L. Butler, of 711 Seventh street, was drill leader for the Red Hots and candidate for band queen during her stay in high school. She is undecided about the future. Almost any kind of sport is included in her hobbies.

She was born in Oklahoma City and has attended school there, in Henryetta, in Davis, Okmulgee and in Perry.

Fair Aimee Butler, 20-year-old daughter of Mr. and Mrs. George Butler, died Friday at 1:05 a.m. in an Enid hospital following an illness of the past several days.

Miss Butler was born in Oklahoma City on September 28, 1920, and moved to Perry with her family when she was eleven years of age. She attended and was graduated from the Perry high school where she took an active part in all school affairs.

She was graduated with the class of 1939.

Active in the work of the Order of Rainbow for Girls, Miss Butler filled a state office for one term, as well as filling all chairs and serving a term as Worthy Advisor for the local Order.

Survivors include her parents Mr. and Mrs. George Butler; one brother, George, Jr., and one sister, Ellen Butler. An aunt, Mrs. Fair B. Boyett of Oklahoma City and an uncle, Major B. D. Butler of Fort Benning, Ga., also survive.

Interment will be at the Rose Hill Abbey in Oklahoma City at 10 a.m. Monday where Christian Science services will be held.