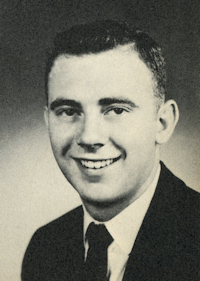 Perry, Oklahoma has lost a pillar of the community with the loss George Rice. George, who had the innate ability of making everybody smile, passed on Friday, January 10, 2020, of natural causes.

George was born in Morrison, Oklahoma and graduated Perry High School in 1956. He played football and was on the wrestling team. He attended the University of Central Oklahoma and graduated in 1962. In 1980, George opened a portable restroom and temporary fence company, A-Throne, in Southern California, which is owned and operated by his son, Mike Rice, and is still a thriving business.

George loved riding motorcycles, hanging out with his high school friends, and eating at the Kumback. He loved dogs, especially Boxers, and the University of Oklahoma Sooners. Most importantly, he loved telling stories and making people happy. George has impacted many people with his acts of kindness not only all throughout Oklahoma, but Los Angeles, California and Phoenix, Arizona, where he has also worked and lived.

George was preceded in death by his parents and his wife Phyllis who passed in 2009.

George is survived by the community who he loved so much and his two children Mike Rice and Dixie Vane. George is also survived by two grandchildren Corey and Sedona Vane, a granddaughter-in-law Sierra, two great grandchildren Cody and Parker Vane, a dog Lilly, along with many other people who loved him like a grandfather. George is also survived by his high school sweetheart and mother to his children, Earlene Nicewander-Williams and three cousins Larry, Johnny and Bob Regnier. George found family in everyone he loved and made everyone feel like family.

Funeral services will be held on Saturday, January 18, 2020 10:00 a.m. at First Christian Church of Perry. Mike Rice will officiate the service. Burial will follow at Grace Hill Cemetery also of Perry. George was a Harley-Davidson man, so we ask that you dress in Harley gear for the service. Friends are welcome to stop by Brown-Dugger Funeral Home to pay their respects on Friday from 10 am until 6 p.m. The family will be present at a reception at the funeral home on Friday night from 6 to 8. In lieu of flowers, the family asks that you “pay it forward”. Because of the generosity and kindness George showed to you, please pick a charity of your choice and make a donation in his name or, you can pay it forward to anyone in need just like George would have.